Review: Netoge Episode 2 Review: My Waifu Isn’t What I Expected?

Now that’s how a light novel title sounds. Anyone can do it!

So we start the episode from where we ended it last week, everyone’s doing their introductions and when it gets to Kyo, Akane comments that Kyo is pretty much rich.

She denies it saying that’s pretty much only moderately wealthy… 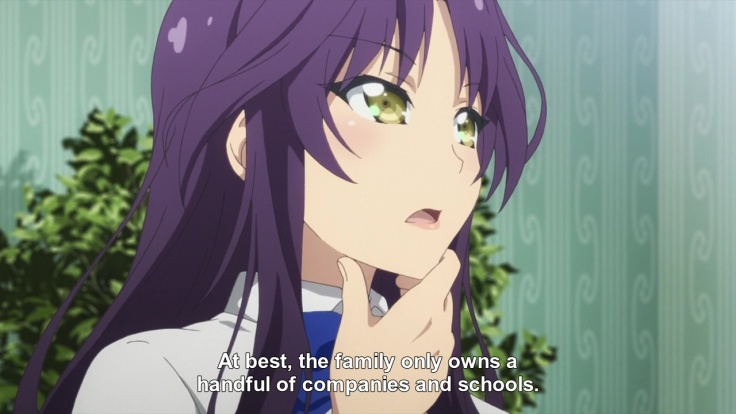 Meanwhile the struggle for most normal people is still real. 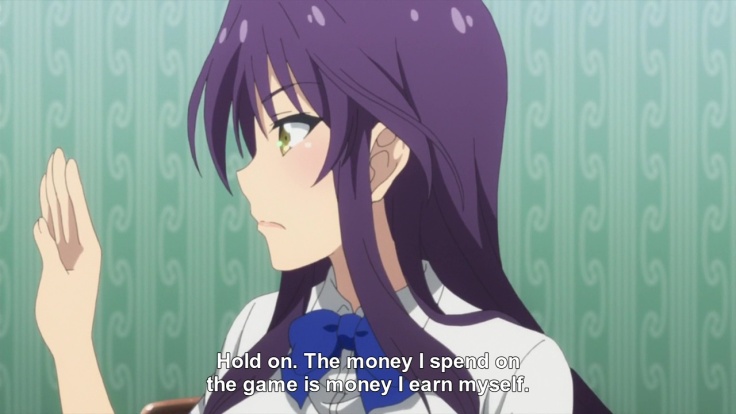 Ah it’s hers. Do you earn it or is it your allowance, Kyo-chan?

In a way that is admirable so we’ve got to end that. 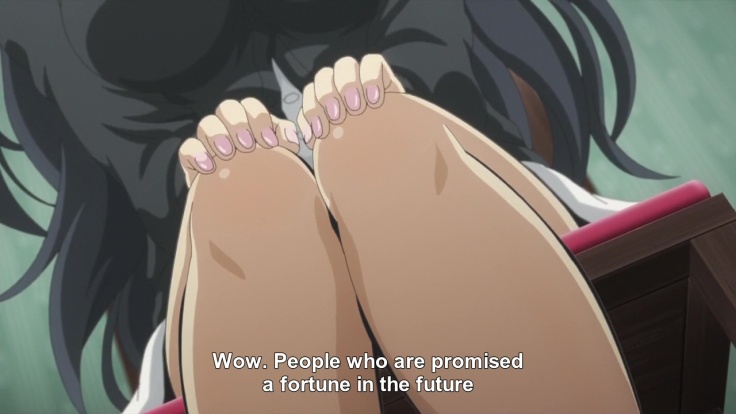 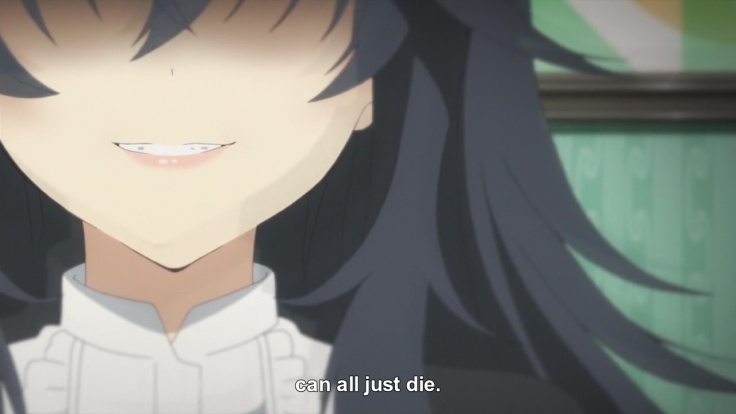 Ah it’s so tough to be poor ain’t it…

But they manage to calm her down but then Kyo goes into explaining how her parents control who is or is not her friends in real life but she can befriend who ever she wants online which lead her to playing online games.

Kinda sweet in my opinion.

But then she says she doesn’t have any friends in real life. 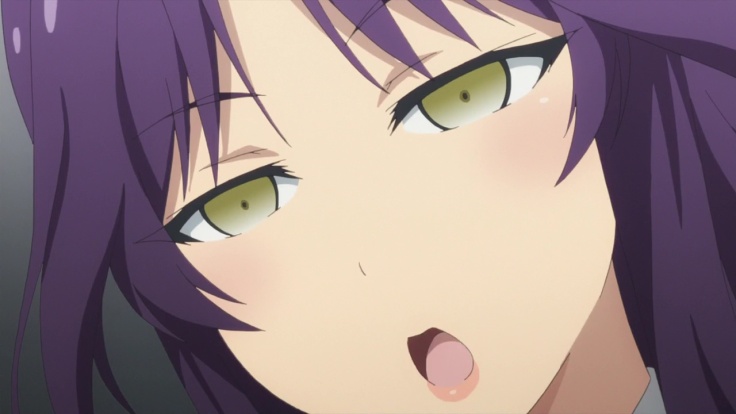 But Ako’s there for fighting against the normies! 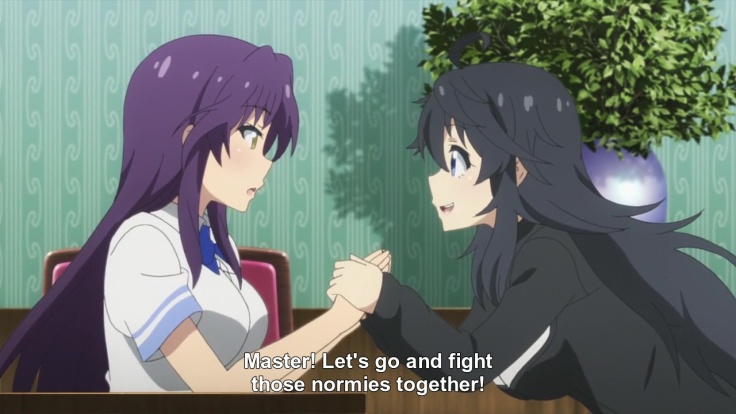 Yeah! Two hot girls fighting against the normalcy of the world. Throw in a sarcastic audience stand in and it’s similar to Haruhi Suzumiya!

So after the opening which is very cute as heck, we have the group arguing about the eternal argument:

I’m personal towards leveling the armor first seeing as you can’t fight if you’re dead. Then again the two arguing are Akane and Lucian who are a physical DPS and a Tank respectively. They are of course going to have different thoughts on which to level first.

So what do you think should be first Ako? 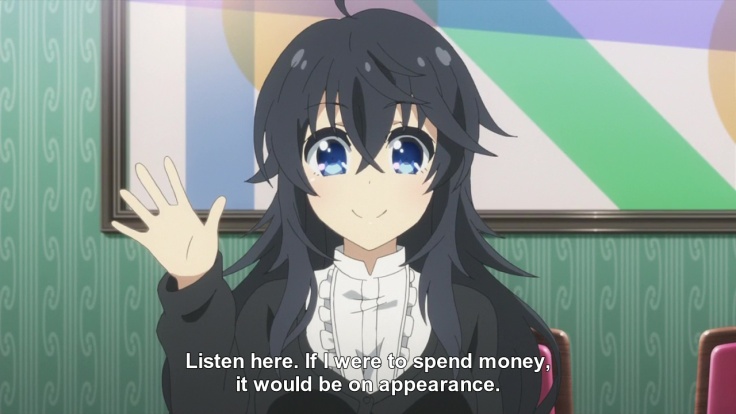 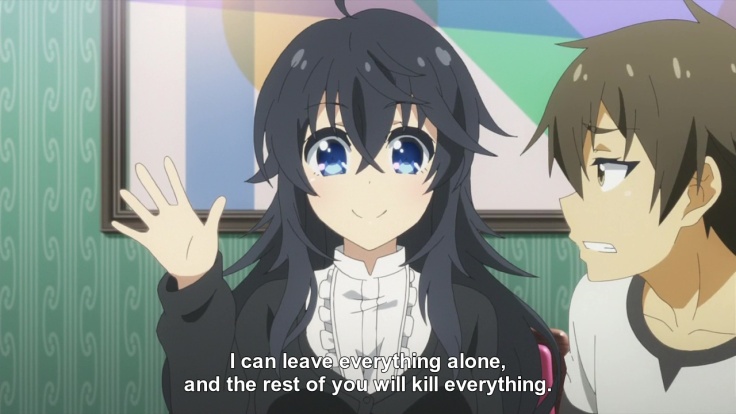 Spoken like a healer that can’t do their job right…

So then they start doing a little bit of ragging on Ako for being a bad healer but it’s all in good fun.

So after that the meetup ends and Lucian IRL apologizes to the girls since he thought they were all guys. They all take it pretty good except Akane who threats him not to talk to her during school.

Akane’s got no chill and here I thought they had become friends IRL too.

But then she gives the cutest look ever… 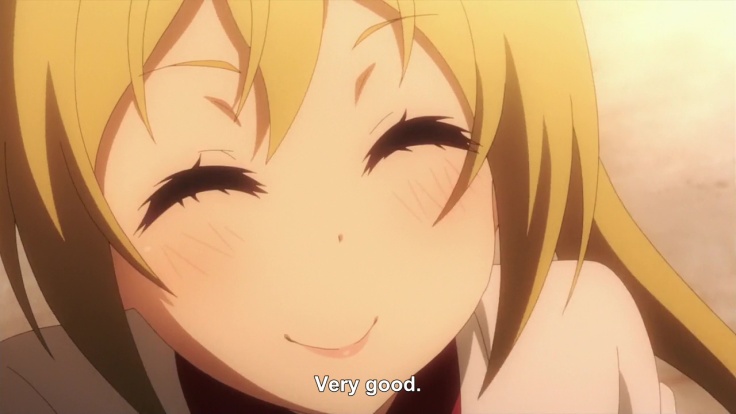 Darn that smile! It’s so cute you have to forgive her for stuff.

But Ako feels the need to mark her territory. 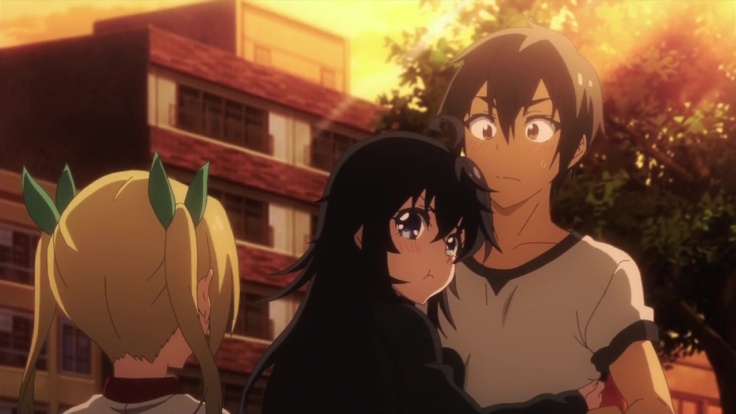 Ako best girl is on her job. 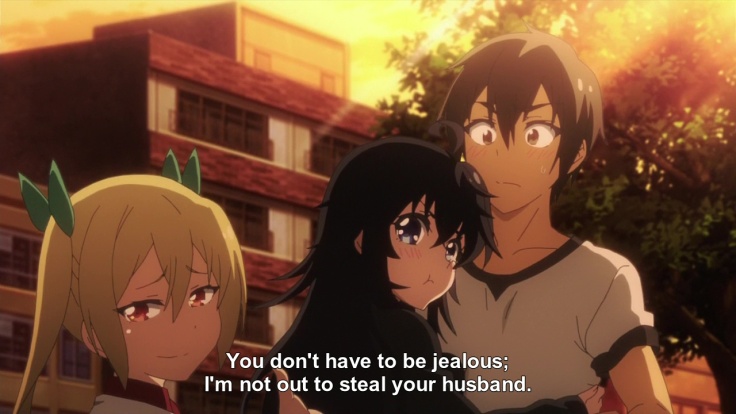 Akane’s got some chill back. She doesn’t even want your boyfriend.

So Kyo and Akane leave while Lucian walks the other way with Ako. Maybe I should call him Nishimura instead. It feels more comfortable to say that than Hideki. I’ll do that.

So Nishimura walks Ako to the bus stop while they walk they talk about how he thought she was a guy even though she told him she was a girl.

So then she asks why did he decide to marry her in game then? 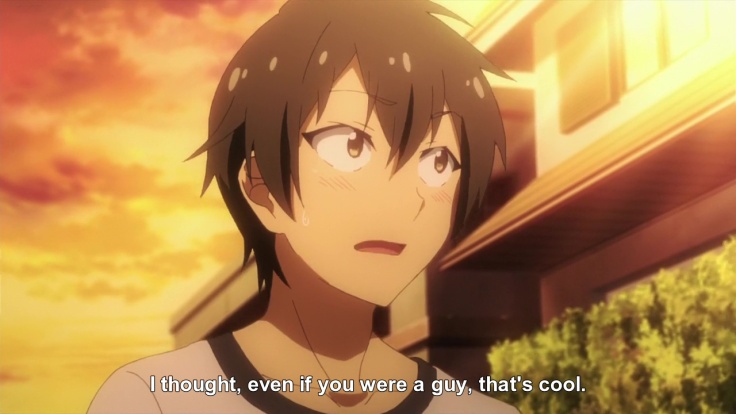 Yeah…well yeah…as long as it’s got a hole type aren’t you man?

She’s not about that life.

After that Nishimura explains that he’s seeing reality and the game as different things so he can like the character Ako is in game but have no feelings for the person that is playing the character out of the game.

So Ako gets happy and holds hands with him because despite that he still chose her.

It’s a cute moment but then Nishimura’s got to ruin it with reminding himself that the game and reality are different. 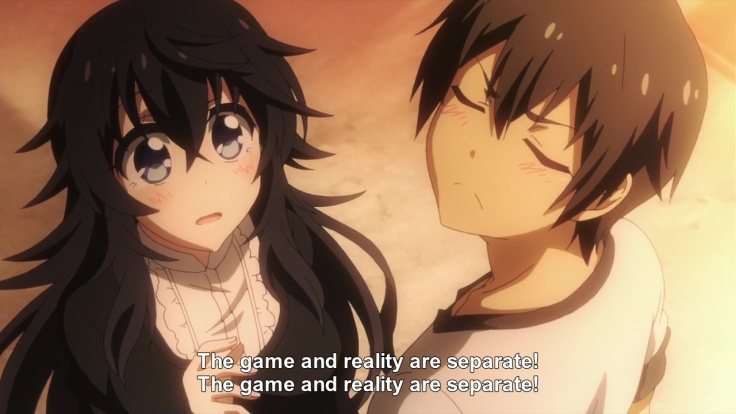 Bro I’d go out with her just to check. After all even if someone’s playing a character online, there is a certain amount of that person still in the character. No one’s a completely different person from the person they are online.

So after that, Ako heads home and we go back to Nishimura’s to play the game tonight.

And it’s a bit of a little teasing and stuff but then Nishimura, remembering that hey these are all girls goes into this mode and sees them all as they are in real life.

What kind of black magic allows Kyo to keep her modesty dressed like that?!

It’s a note that I found on Anime Reddit that they keep switching between how their characters in game and then when they break character they look how they do IRL.

So we move to the guild bar where Kyo’s logs off and Ako tells everyone she is about to as well and then she’s going to take a bath and go to bed.

And with that setup the images go rampant in Nishimura’s mind. 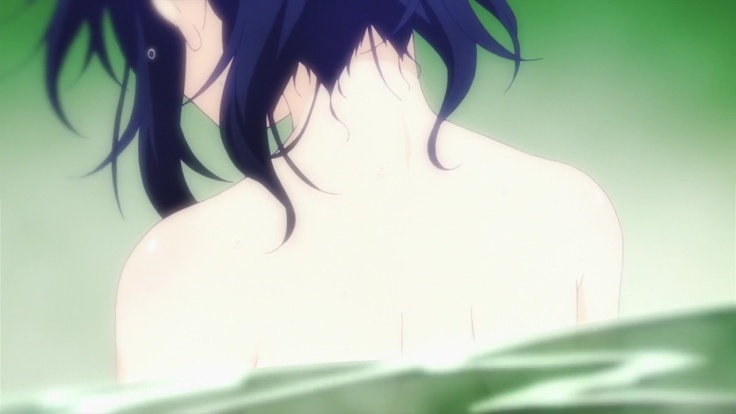 So when Ako logs off it’s just Akane and Nishimura so once they’re alone Nishimura teases her just enough so she’ll break character. 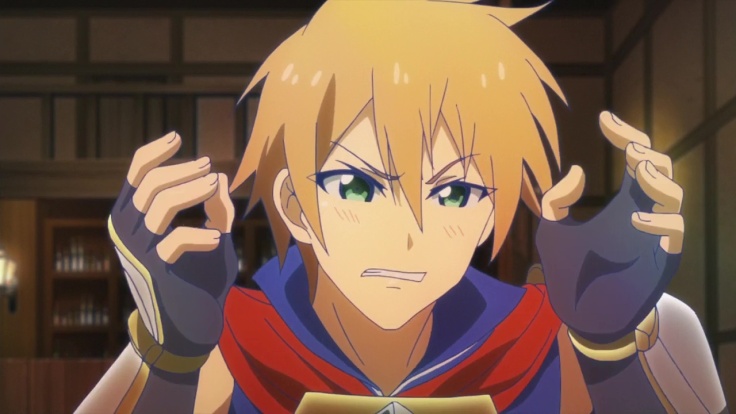 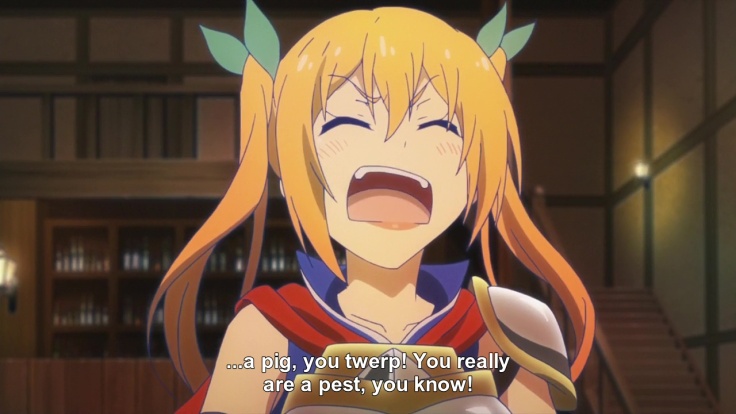 Some people are just fun to mess with. Am I right?

So after that Akane reminds him to make sure not try and talk with her and Ako at school so nothing gets started.

So the next day comes up and this happens. 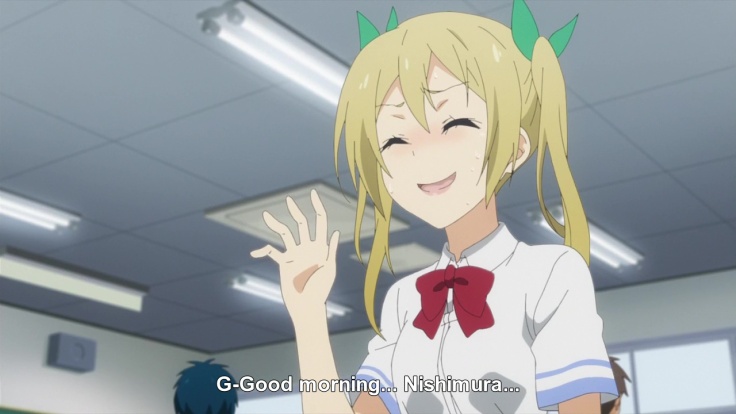 I thought we were going to keep things the way they were before they met? Here you are breaking the status quo Akane.

So with her friends around and everyone around she realizes her mistake and goes off on him before sitting down.

now I have to admit I watched this part in short burst mostly because I had to keep pausing it in order to get rid of the embarrassment for the character’s situation.

So Ako comes into the room calling Nishimura Lucian and Akane Schwein which really gets under both of their skins and really embarrasses both of them.

Those poor unfortunate souls…I did laugh at their suffering during the second watch to make this review though.

So we move down to the staircase in order to get what’s up about Ako and it turns out that she can’t see the difference between the characters people play in the game vs the people they are in real life.

Remember how her avatar in the game looks exactly how she does in real life so she thinks that everyone else is the same way.

So the two of them resolve to make sure to keep their net game habits silent so they ask Ako to call them more formally while at school and she agrees. I hope this turns out well.

So after that little thing is dealt with we have this hot teacher voiced Yoshino Nanjo telling them that homeroom is about to begin. 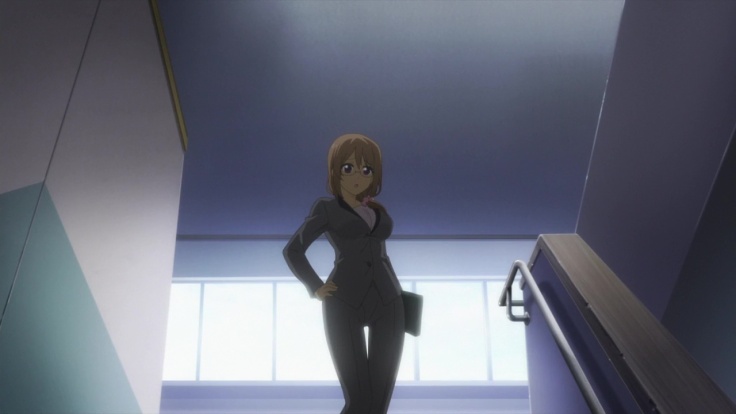 This is definitely going to come up again…

So after going back to class and getting out for break, Akane, Nishimura, and Ako more so the first two are tired. But Ako’s got that taken care of at least for Nishimura. 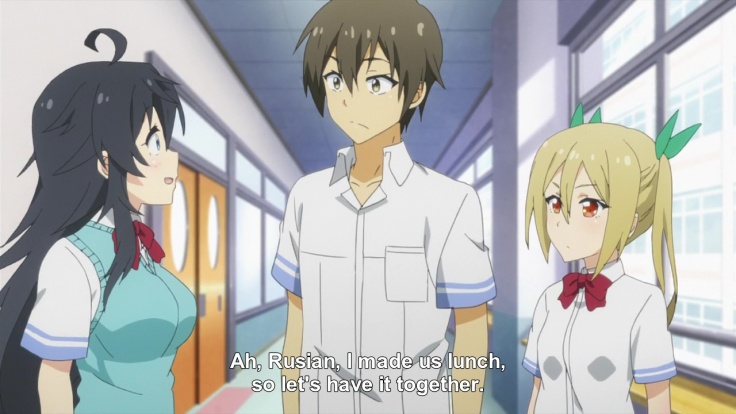 So what’s so wrong with this? Shoot…when I don’t have a lunch I have to starve until I get home. I don’t have anyone that will cover me because they care… 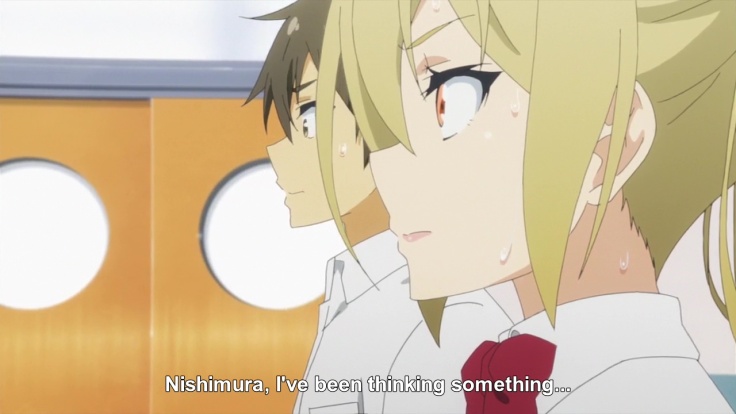 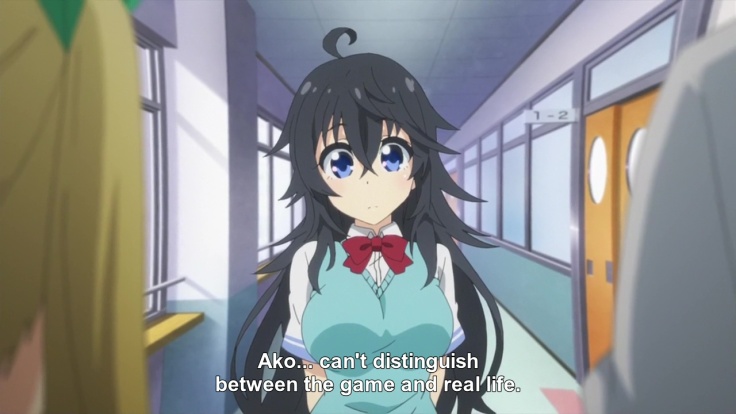 Why Kyo…why must you be so cruel…

So Kyo tries to calmly explain how while yes she did fall in love with him but it was only in the game. Ako says that just because they fell for each other in the game doesn’t mean that her feelings aren’t real.

Which is true, there are couples who’ve met through video games or MMOs and gotten married. 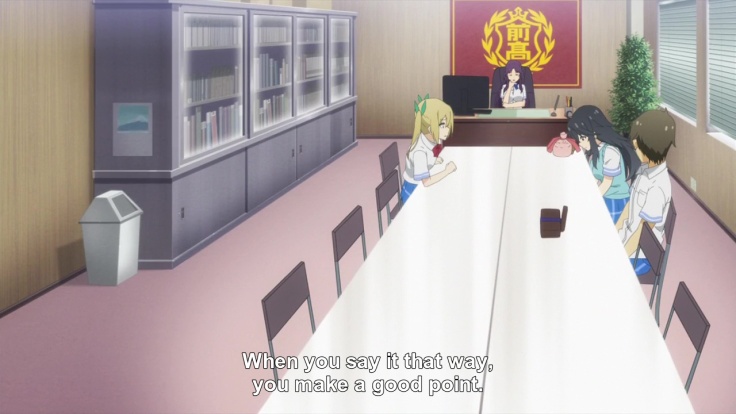 So she turns to Nishimura and questions why won’t accept Ako if she clearly likes him back. Once again Protagonist-kun says that reality and the game are separate.

So after a cute speech about how Nishimura never left her even though everyone else did, Akane says she’s leaving. However Nishimura tries to stop her.

And she says this… 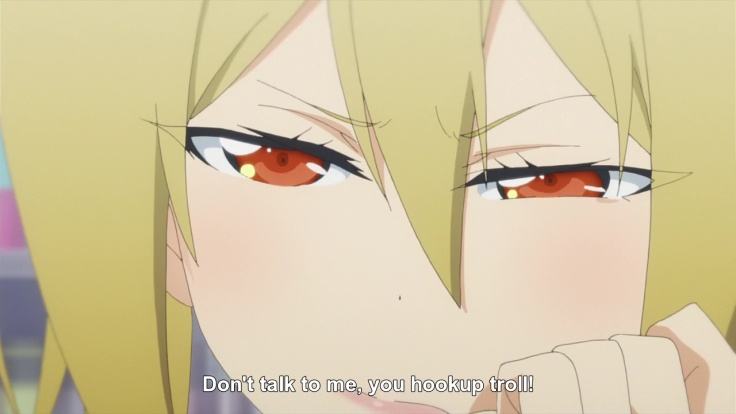 OOOoh someone just got rekt. But what does it mean? 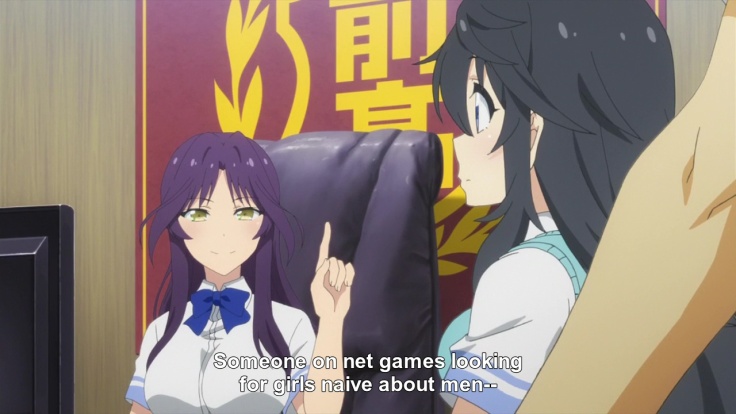 So Nishimura comes to the only left to him. Change Ako’s mentality…good luck bro. You can’t change crazy. You merely shift it to somewhere else in their life…

So in only a day or a few hours(it’s hard to see), Kyo’s got a new club set up for them to play net games so Ako can see the difference between IRL and the game. 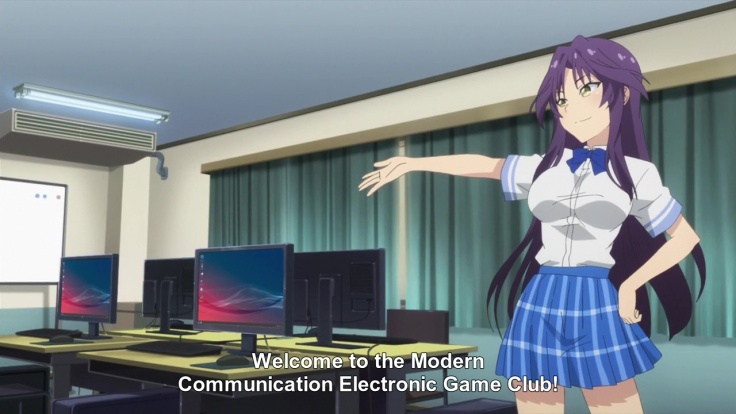 So everyone save Ako is looking at it suspect but Kyo manages to get Nishimura in with making Ako normal and Akane gets in because she gets to use a high computer which is better than her home computer.

And as the episode ends Nishimura in game runs into Nekohime…

So the club begins and the episode ends.

It was a pretty good episode and watching the suffering of the characters as Ako embarrassed them at school was hilarious.

So until the next episode,
Later Days 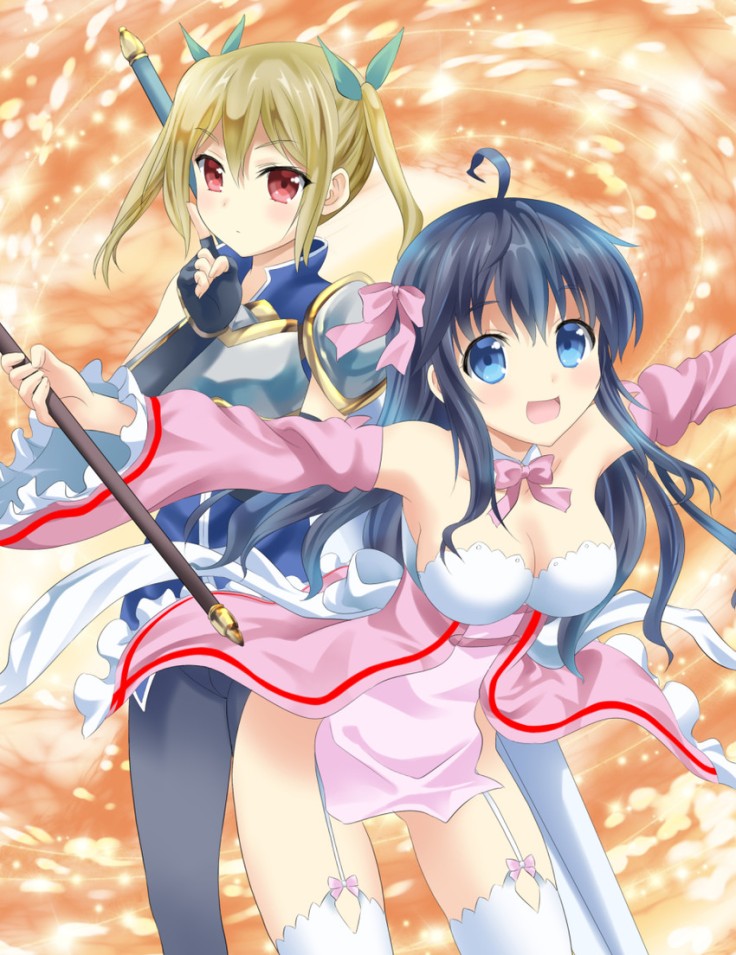 Ako and Akane are very cute! And usually I don’t like the tsundere type. Make sure to check out the Pixiv link!