Ando you were best girl! But now the hole of best girl has been left open for a new stronger best girl to fill! Sayuki Kuroda!

So this is going to be a shorter review sadly. I have a lot stuff to do and not a lot of time to do in.

So this episode is about mostly the flaws in Ando’s behavior. She’s doing a lot of things that while she means well, she’s screwing everyone over.

A major part of any type of colloborative project is discussion and checking. Everyone needs to be on the same page but Ando isn’t. She’s making her own moves and trying to call all the shots.

Sayuki isn’t having that. 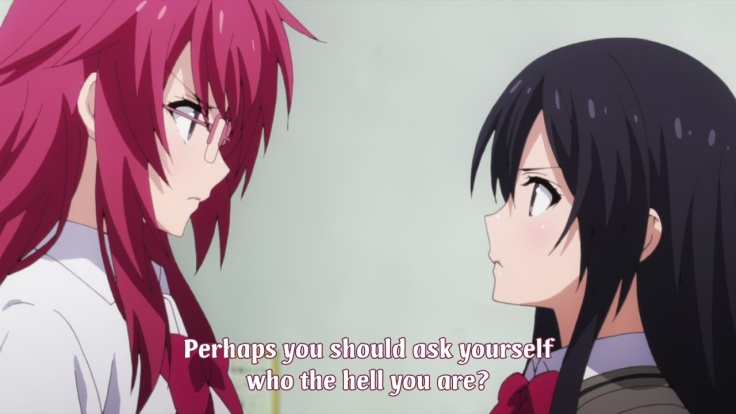 Now Sayuki was in the wrong back in the third episode because she was running things like a business and not a group of volunteers. However Ando is wrong right here. She needs to realize that she’s a part of a team where messing with someone else’s stuff without informing the group will slow down the project.

So not being able to take Sayuki’s attitude to the situation and Sayuki can’t take Ando’s attitude in regards to the project, Ando chooses to leave.

However she leaves a big hole that no one can fill. They still need a programmer and none of them know how. As someone who is studying Programming, some of it’s easy but the rest is hard.
However there is an video game engine out there specifically made for the creation of Visual Novels called Ren’py. It’s pretty easy to use but that would mean learning to use the new engine and then translating all of the pictures, text, and music to the new engine which would take time.

At that point it would be simpler to just get Ando back.

And that’s what they try to do but it takes a hard and very confusing fishing trip with Ando’s father’s fishing boat to manage to get Ando to swallow her pride and return.

Good for her. At least the project can move forward.

And with that we end the episode.

Not a bad episode. But Ando’s casual dropping and picking up of the project is really annoying.

So that’s all I’ve got for this episode.

Until the next episode,
Later Days

Usually my links are from Zero-chan but they didn’t have anything good so I’m going to use Pixiv….I thought I was a loyalist…