Back when the series started, Dragon Slayer Magic was the cool thing and then the God Slayers came around and now the Demon Slayers are the cool new thing. It’s just natural. 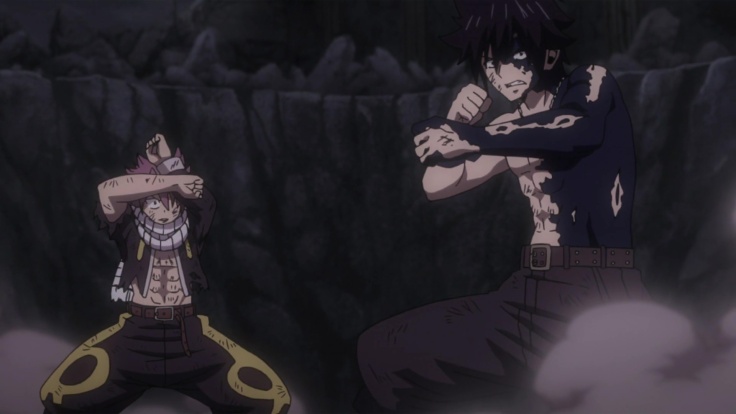 What? Those fairies are still standing?

And with that Gray passes out and says that the rest is up to Natsu. It’s okay Gray. You were more than badass this arc.

Meanwhile we see the other guilds around Fiore try to take down the Face statues but no dice.

Then we go back to Natsu and Mard Geer. Mard Geer quickly goes into Etherious form but with his power Natsu uses Dragon Force and manages to use his Dragon Slayer Secret Art: Crimson Lotus: Exploding Flame Blade and that’s enough to knock Mard Geer off his feet but not enough to beat him.

Lucky Gray always comes through at the end with a Ice Devil Slayer’s Zeroth Destruction Bow to end the fight.

However as the battle ends, Face begins to go off. However we’ve got that covered.

And as the dragons show up literally out of no where, all the Faces are destroyed, saving magic all over the continent.

As Magic is saved, Gray picks up the Book of END and immediateley Gray and Natsu start fighting over what they want. Gray wants to destroy because of his promise to his father and Natsu wants to give it to Igneel because his request from his father.

And as the episode ends we see Igneel landing on the ground with Acnologia seemingly defeated.

Pretty good episode. It’s always nice to see Gray get a power up. He’s always been good but now he’s actually on tier with Natsu in terms of sheer power.

So that’s all I’ve got for this episode.

So until the next one,
Later Days
You can ask me as many questions as you want on Ask.fm and you can follow me on Twitter to know when my new reviews are coming out. You’ll know when stuff comes out right when it does! 🙂