Deven: How long has been since I seen a Fairy Tail episode that A-1 Studios didn’t make up? It feels like forever.

Inner Writer: There’s no hope. Maybe canon material was only a dream?

Deven looks up and sees an oasis called Canon Material

The filler’s over! Thanks Anime gods!

Now some old business. Some of you want to say that I haven’t done any reviews on the fillers. Not to be all the way snarky and sarcastic but here’s the review.

So now that old business is taken care off let’s get to the good stuff!

So the episode starts off with Bisca and Alzack, Asuka’s parents, going out on a job and leaving her with Natsu….

I love Natsu as character but I’d rather give my daughter to Happy for babysitting.

So the first thing after her parents leave, Asuka asks for some cake but Mirajane says that they’re out.

No! Don’t say anything about sweets! If you do…

That’s Erza for you, say sweets and she’ll lose that cool and sexyness aura she’s got. Erza suggest that they get some legendary Maximum Sweet Strawberries which only grow one every 10,000 years.

Side Note: Erza Scarlet is voiced by Sayaka Oohara who has a Proficiency in the English language. That’s why her English actually sounds like English. I’ve listened to songs three or four times and realized that the singer was saying a word in English and not saying something in Japanese.

Anyway Erza and Lily go to get the strawberries while Wendy makes the cake.

Then Natsu and Asuka have a sharpshooting contest and…Natsu loses.

What do you expect when her mother has Requip: The Gunner and her dad uses Guns magic. She was born to shoot like those kids with parents in the NGA.

Anyway after Asuka rides Natsu around like a horse, they go out into the park and after she makes Natsu jump in the pond, she says that she wants to go on a job.

Why? Because she can buy something but when Lucy says that they should try and ask her parents she puts on the waterworks. 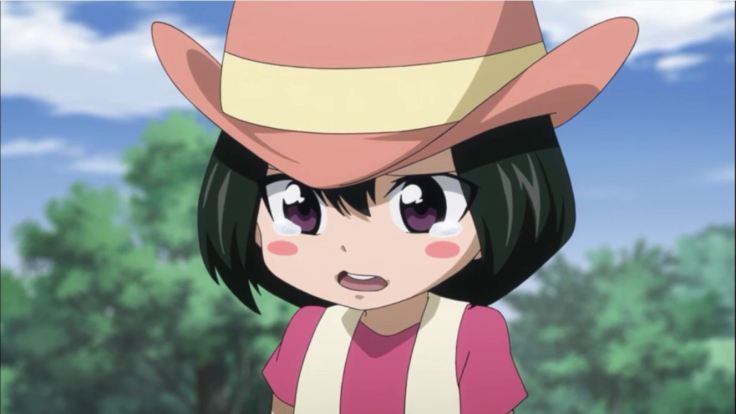 So the first job they try is for someone to stand in for the statue in a fountain. So of course Lucy calls up Aquarius. She was able to go off on her but Asuka’s cuteness saved her butt there.

So they do jobs and manage to get the money for Asuka to buy a little snow globe back from a pawn store. 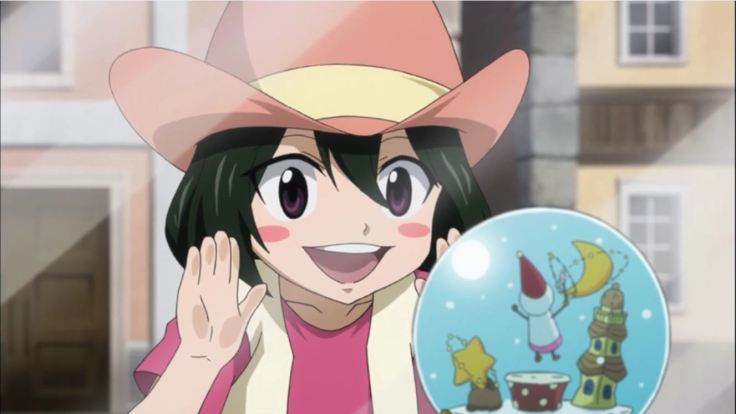 After that Asuka tells a quick story about how she and her parents saw the globe in the store and some how the situation goes to Asuka asking if Lucy and Natsu kiss. Asuka orders for them to kiss Natsu goes in and this…

I’d look for a new tongue and lips…

But turns out cute little Asuka can’t even hold onto her globe for so long because then some random flying thieves steal it and take flight. Asuka tries to shoot them down with her toy gun but it doesn’t work.

He totally threw that match against Asuka. That’s sweet of him that he covered Asuka’s eyes to make her think that she was the one that shot them down. That’s nice of him.

So in the meantime, Wendy finishes making the cake and Erza finds the strawberries. I could show you what they did but Erza…seriously Strawberry Armor.

When and where other than now are you ever going to use that armor?

So once Alzack and Bisca get back, Asuka gives them back the snow globe and they explain that they had to sell the globe to get some money. They don’t say outloud why did needed it but we see a flashback.

During the 7 years while the Tenrou group was gone, Asuka got sick. It was a choice between selling something that was precious to them or buying their daughter medicine. They chose the medicine without a second thought. Now that’s sweet.

And with that the episode ends.

Now that’s a good episode. It’s good that Fairy Tail is at least doing some good again. The next episode is going to be my favorite side chapter, 413 Days. Why because it has a whole lot of shipping, mostly Gray x Juvia shipping which is my favorite pairing other than Gajeel x Levy.

Also A-1 Studios changed the ending animations to a slow pan of one of the female cast so like Lucy, Erza, and Wendy in pajamas, I’ll have the picture here.

Anyway next week Fairy Tail stays on a good streak.

Until then,
Later Days