So now that Illya has made her proper appearance I feel the need to talk to those that came in on the Fate Series on Fate/kaleid liner Prisma Illya. This Illya ain’t a Loli Magical Girl trying to save the world. She wants everyone dead. Keep that in mind as you watch.

So we start off as with all proper death matches, with introductions.

I just need to say it again. Damn Ufotable! The sheer color and detail they put into this! What was Studio Deen again? I don’t even remember…

Anyway as Illya finishes her introduction, Saber tenses up, ready for a fight.

But Saber don’t you remember Illya is Irisviel’s daughter! Killing her would be a disrespect to your fallen friend.

That’s for you all that came in on Fate/Zero. I fully intend to watch that. I’ve seen some fights on Youtube and Berserker had to have been the most powerful Servant other than Gilgamesh in that war.

Side Note: The reason that Saber doesn’t recognize Illya as Irisviel’s daughter because she should be around 19 or 20 instead looking about 10 at max. The reason is well…I could tell you but that wouldn’t give you a reason to come back to learn the answer would it? ;P

Note: All Masters possess this ability but it seems that few ever use it. In Fate/Zero Lancelot(Berserker)’s For Another’s Glory negates this ability, leaving his identity as well as his full power a mystery

There’s no point in looking Rin…as Kuruma the Nine Tailed Fox said in Naruto, all you’ll see is just how immeasurable it is.

Then Archer says that Berserker’s so powerful he can take on the other six by himself! Damn!

Rin sends Archer out to fight according to how an Archer should. Sniping from miles away!

However that leaves them wide open on the defensive and close range offensive. But don’t worry we’ve got Saber for those.

So after they finish getting their plans together, Illya(I can tell that spelling her name is going to be hard for me.) asks if she can get started?

Aw how nice. At least when she kills everyone she’s nice enough to wait until we’re all ready.

She says just so casual. Like asking do you want to play outside or something.

And then all hell breaks loose. But Rin goes at him with one of her spells but it doesn’t even tickle! Get them all Berserker! 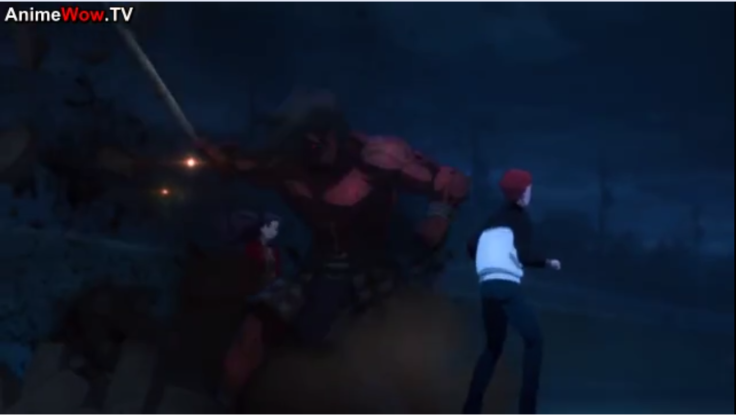 I think that Berserker spent some time in Bleach before the Grail War because he just did a freaking Flash Step.

Well Shiro you had a good run in this war. Like what two hours. Hey some masters that aren’t even going to appear on screen died before then. Consider yourself lucky.

But lucky Saber’s just as fast and she blocks like a badass.

Now for a pic spam of this epic battle

Now what’s freaking amazing is that Berserker goes at this battle like he can actually see how long Saber’s sword is even if it’s sheathed in Invisible Air.

Note: Invisible Air is one of Saber’s Noble Phantasms as King Arthur. It doesn’t really have a basis in a myth but hey it keeps her sword and subsequently her identity hidden. That makes her last longer because the second the enemy figures out who your servant was they’ll make a strategy to exploit their weaknesses

So Saber and Berserker go at it Saber manages to get Berserker off guard and step on his sword. Yeah you’ve got him right where you want him, girl!

Okay appearently after he left Bleach he went to the Pokemon games and learned Close Combat!

And it was super effective on Saber!

So at this point back in the Fate Route, this is where Illya says that Berserker is Hercules(actually Heracles because it goes by the Greek spelling not the Roman spelling) but she’s keeping her mouth shut now.

Good she’ll go further that way. Well not that much further…

So what can we do if Saber can’t get him with sword fighting.

Oh yeah. Archer! I almost forgot about him. So where is he? 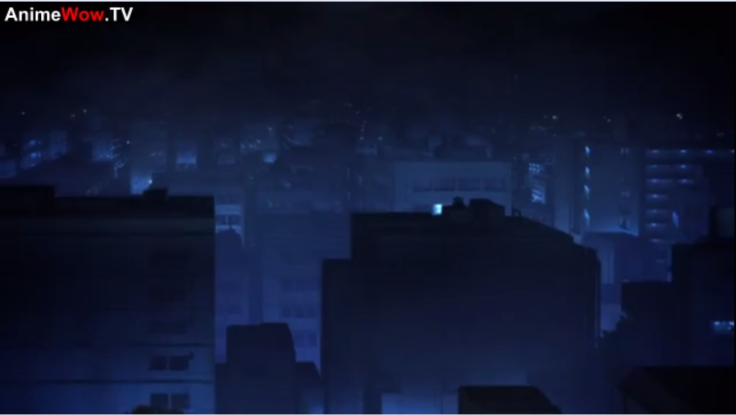 If he wasn’t an Archer, then this clearly wouldn’t work…

Wow that was powerful… 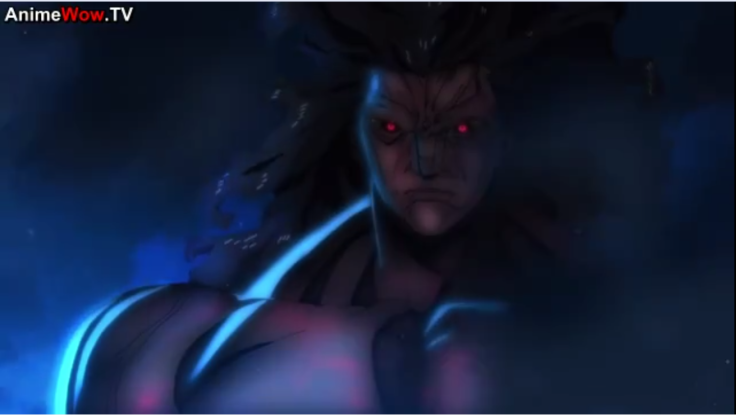 Cares(You know what word I want to use) aren’t given!

She ain’t even trying. Someone bring Illyasviel a chair, a table, some tea, and some cookies. She’s clearly bored.

So Saber vs. Berserker starts up again. And well…let the pics show you.

Is this even fair!

Oh the humanity is there anything they can do?

Hmm nice move but we all know what’s going to happen nice.

So seeing that Archer’s attack had no effective, Saber takes the fight to the graveyard while Rin goes to back up Saber.

Ah wondering what to do? It’s futile no matter what you do! This is Berserker!

Anyway Shiro decides to run off to his death…I mean to the battle.

We have a quick scene with Kotomine and a mysterious young man with blond hair…I could tell you who his is but why should I? Let’s let the story play out and give us the information as it comes.

Howevery you’ll know who he is if you watched Fate/Zero.

After another quick scene of Saber vs. Berserker we go to this.

Oh no look out Illya!

Not even trying! Look she didn’t even turn around!

So now the battle between Rin and Illya starts!

So who do you think is going to win when Illya says this!

She’s only a little girl(physically) but so many badass lines!

So the battle gets started and Rin can’t even hold a candle to Illya. Those little bird things that Illya’s got are insanely powerful and so freaking versitile.

This is going to be a tough one. It’d just be easier to flip her the bird while you’re at Illya. As if it wasn’t hard enough.

So Rin goes up with a frontal assualt with some green gems and creates this. And she takes out two of those little birds! All right! Only two more!

Wow someone got away by a hair’s breath.

After some strategizing with Archer, Rin goes to backup Saber but ends up running into Shiro.

Then Rin goes all tsundere on him…and throws him into a tree with an arm lock. Not bad.

So she is predictably angry about him not running away but Shiro’s determined to fight.

So we go back to the battle between Saber vs. Berserker and it turns out that Saber drew him to the graveyard on purpose so she could use the gravestones and cover from Berserker’s blows.

So Saber does a little speech about how they can’t talk and they can’t even give other their names and all they can do is fight. Basically it’s her thing about being a knight coming up. However when she’s done with that she means business.

Wow she killed him. Muwhahahah! But for how long?

So Rin gets a message from Archer to get clear but why? 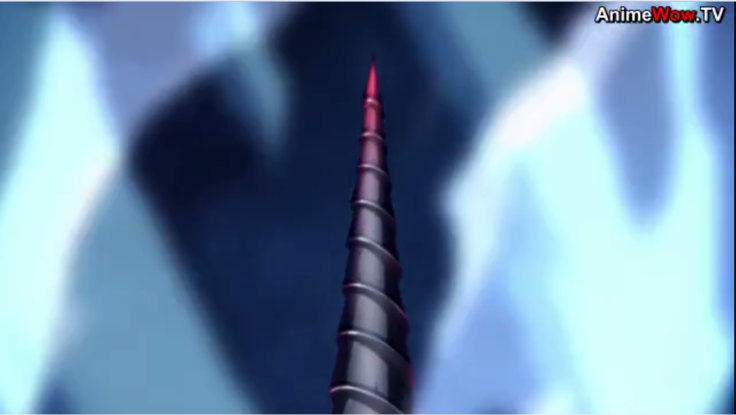 Really right now! Yeah! Only on the third episode we see one of Archer’s best attacks, a Broken Phantasm!

Note: A Broken Phantasm is a Noble Phantasm that has been filled to the limit with mana and if fired acts similar to a bomb

And Archer’s about to fire it off like an arrow!

Note: God’s Hand is one of Heracles’s Noble Phantasms. Coming from Heracles’s 12 Labors, the Heroic Spirit Heracles has to be killed 12 times in order to be truly defeated. And add to the that, he can’t be killed by any way that killed him before. So not only do you need to kill him but you have to kill him 12 different ways!

So what’s up now? Oh nothing. Just pics of Archer’s awesomeness!

Look upon the wreckage!

Archer you are way more powerful than during the Fate Route.

There’s something more to that smile but that comes up later and I can’t tell you.

So what about Berserker… 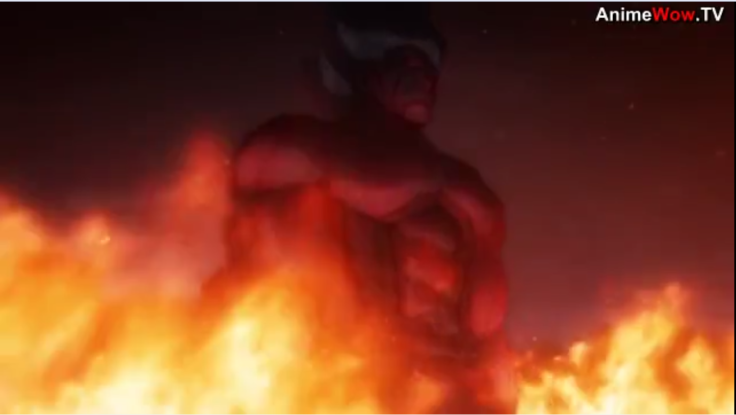 Not a care in the world. Probably barely noticed it.

So apparently Illya has decided to withdraw and her interest has peaked in Rin’s Archer.

Hmm I watched a show when I was a kid and this saying stuck with me.

The Cobra doesn’t feel like biting you today. Walk away.

If this kept going Berserker and Illya would have owned them but hey if she feels like letting them live for another few days then whatever. 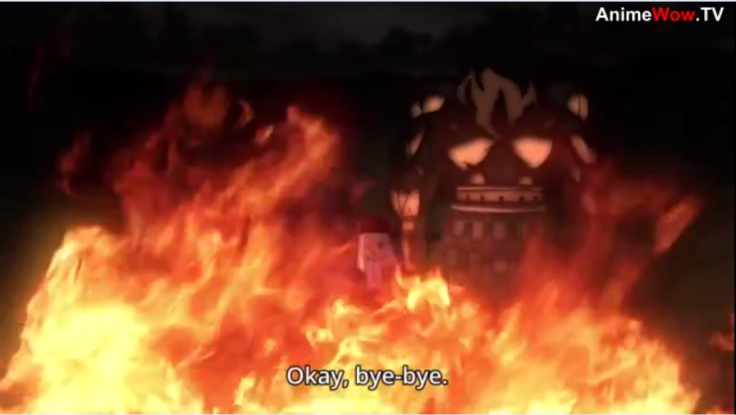 And the episode ends with Shiro coughing up blood and passing out.

Do I need to say again? Ufotable is incredible! What an episode! I can’t stop trembling from the awesome!

So the next episode promises to be an interesting one and at least Shiro learned from his mistake in the Fate route with keeping Saber at him. Looks like she’s going to the classic mysterious transfer student thing. She’ll totally have all the guys all over her.

So that’s all I have for this review. The hype is truly and epically real for Fate Stay Night,

Until the next review,
Later Days